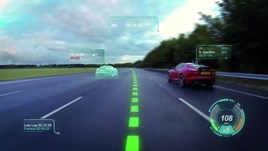 Jaguar Land Rover is working on virtual technology which will display digital information directly onto the windscreen, including speed, navigation and hazards.

For those looking to race their Jaguars, the technology can also project braking lines, racing lines and virtual cones, as well as ‘ghost data’ which shows a digital version of a previous race time.

Dr Wolfgang Epple, director of research and technology for Jaguar Land Rover, said: “We are working on research projects that will give the driver better information to enhance the driving experience.

“By presenting the highest quality imagery possible, a driver need only look at a display once.”

JLR is developing a gesture control system to keep the driver’s eyes on the road and reduce distraction by limiting the need to look at or feel for buttons, touch screens and switches to press.

Dr Epple said: “Gesture control has already become an accepted form of controlling anything from TV sets to games consoles.

“The next logical step is to control selected in-car features. We have identified which functions still need to be controlled by physical buttons and which could be controlled by gesture and carefully calibrated motion sensors.

“The system is currently being tested on a number of features including sunblinds, rear wipers and satellite navigation maps. It has the potential to be on sale within the next few years.”

JLR’s research team is also looking at technology that could replace rear view and external mirrors with cameras and virtual displays.