Putting the shine back into paint protection 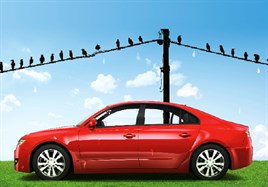 It sounds like a dream come true for the lazy motorist – a car that washes itself. And it seems to be edging closer, with body protection supplier Paintseal Europe saying trials are at an advanced stage for a new generation of its Gen-3 Glasscoat.

“It promises to be four times the strength of Gen-3. the nearest product there will be to a self-cleaning vehicle – and should be ready to market within the next 12 months,” said Paintseal director Rob Collins.

However, if reality falls short of the hype, rivals may be quick to pounce. Last year, Autoglym complained to the Advertising Standards Authority about GardX and Jewelultra, alleging that claims about the effectiveness of their products against damage caused by bird lime were misleading. GardX and Jewelultra rebutted this, with test reports to support their argument.

An executive of another supplier told AM: “It was a reminder that we all have to be careful about promotional material. While we are confident of our treatment’s protection against things like oxidisation and road salt, in the case of other potentially harmful agents, notably bird lime, customers are advised that it can ‘mitigate against the effects of...’.”

What’s undisputed is that most treatments offer varying degrees of resistance against pollution and, in the case of fabrics, spilt food and drink. That gives dealers a persuasive case for featuring them on the ‘extras’ menu.

John Boseley, managing director of Jewelultra, said: “There are customers in the ‘pride and joy’ category, who want to keep their vehicles looking in showroom condition, and those who recognise the benefits at trade-in time.”

With manufacturer endorsements ranging from Jaguar Land Rover to Kia and customers such as Jardine Motors and Vertu Motors, Boseley reports that Diamondbrite’s UK business has risen by more than 12% over the past year, with even more growth in the Middle East, its biggest market.

At less than £100 for the cost of the product and its application, Boseley said dealers could expect to charge between £299 and £399, depending on the vehicle’s size and brand. Sales penetration typically ranged between 60-70% new and 35-40% used, rising to nearly 100% for some of the more prestigious brands.

GardX sales director Dylan Haskell said the company’s inclusion of paint and fabric protection in a ‘smart’ insurance package, or complete wheel product, covering wheels, tyres and minor bodywork damage had made a “significant difference in building value”. A three-year package typically cost the customer between £449 and £479, representing a 70% mark-up.