2015 Ford Focus to include speed and stereo volume limiters 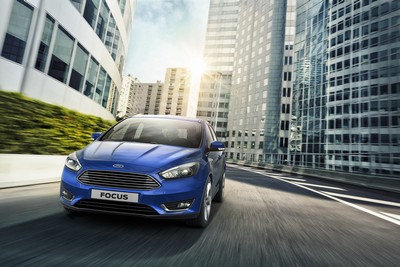 Prices for the new Ford Focus, in dealerships from November, will start from £13,995; the same as today's Focus, with top Titanium and Titanium X versions costing £100 less than the current equivalents.

Ford's MyKey aid for novice drivers will also appear on the new Focus.

The Ford MyKey technology, which debuted on Fiesta, lets owners programme a key - usually for younger drivers - that restricts the top speed, reduces the maximum volume of the audio system, and can disable it altogether if the driver and passengers are not using safety belts.

The 2015 model is the first Ford to offer 'perpendicular parking', an additional hands-free parking technology to help drivers reverse into spaces alongside other vehicles.

The current Ford Focus debuted 'active park assist' that uses ultrasonic sensors to locate parking spaces and steer the vehicle while the driver controls the accelerator and brake. The addition of new sensors to the rear enables 'perpendicular parking' to operate in the same way.

These extra sensors also enable technologies that help drivers as they manoeuvre out of parking spaces:

> 'park-out assist' helps drivers as they exit a parallel parking space. After the driver has chosen either the left or right hand side, the system operates the steering while the driver operates the accelerator and brake

A new 1.5-litre EcoBoost engine delivers 182PS and 270Nm torque - the same as the outgoing 1.6-litre unit yet with fuel economy improved by seven per cent and CO2 emissions reduced to 127g/km CO2.

The new Ford Focus diesel model range, which is priced from £17,995, returns 10% better fuel economy than today, while new petrol-engine versions achieve a comparable four to seven per cent improvement.

"The Ford Focus is the UK's favourite family car, so the launch of the new model is an exciting time", said Mark Ovenden, chairman and managing director, Ford of Britain.

"With unmatched levels of technology and impressive fuel economy, combined with Ford's traditional driving dynamics and competitive pricing, we believe that the new car will not only delight our existing customers but also expand the appeal of the Focus brand."