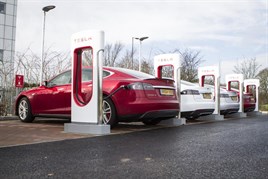 Tesla has opened the latest addition to its Supercharger network, in Maidstone, Kent.

The new Superchargers are located at Eclipse Park, which is conveniently located just off Junction 7 of the M20.

The Superchargers are free for Supercharger-enabled vehicles and can be accessed in the car park, which offers free parking to Model S owners whilst charging.

Tesla’s UK country director Georg Ell said: “The Maidstone Superchargers are an exciting addition to the network, enabling travel through Europe from the UK and for our European owners to be able to drive easily into the UK.

“Currently, the European network extends down to the south of France and Italy and up to Norway and Sweden.”

Cabinet member at Maidstone Borough Council Cllr Malcolm Greer said: “I am delighted that Maidstone will form part of Tesla’s European supercharging infrastructure. It is a massive leap forward in electric car technology.

“The idea of being able to travel across the UK and the continent without generating pollution or having to pay for fuel is not only good for the environment but also good for the wallet. I was very pleased to hear that our planners were able to turn this application around in six weeks to meet Tesla’s timetable.”

In the last few weeks, the Supercharger network has been strengthened with new locations in Exeter, Warrington, Heathrow, Bristol and the UK’s largest Supercharger station in Westfield White City taking the total to 17 stations in the UK. Tesla plans full UK and Ireland coverage by the end of next year to enable travel throughout the British Isles.