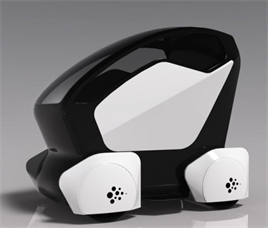 The first official trials of autonomous cars have taken place in the UK, with a government minister claiming "driverless cars are the future".

This morning, ministers will see the Gateway self-driving passenger shuttles in use at Greenwich, while in Milton Keynes and Coventry Lutz 'pods' (pictured) will be on show and in Bristol the BAE Wildcat.

Transport minister Claire Perry said: “Driverless cars are the future. I want Britain to be at the forefront of this exciting new development, to embrace a technology that could transform our roads and open up a brand new route for global investment.

“These are still early days, but today is an important step. The trials present a fantastic opportunity for this country to take a lead internationally in the development of this new technology.”

Perry was joined at the Greenwich launch this morning by business secretary Vince Cable.

He said: “The UK is at the cutting edge of automotive technology – from the all-electric cars built in Sunderland, to the Formula One expertise in the Midlands. It’s important for jobs, growth and society that we keep at the forefront of innovation, that’s why I launched a competition to research and develop driverless cars. The projects we are now funding in Greenwich, Bristol, Milton Keynes and Coventry will help to ensure we are world-leaders in this field and able to benefit from what is expected to be a £900 billion industry by 2025.

“The Government’s industrial strategy is backing the automotive sector as it goes from strength to strength, we are giving business the confidence to invest over the long term and developing cutting-edge technology that will create high skilled jobs.”

It will undertake three live trials of driverless vehicles including passenger shuttle transport and autonomous valet parking of electric cars. Led by TRL, the project is based in the Royal Borough of Greenwich in London.

Other key consortium members include RSA, the global insurer, which will be looking at how automated vehicles might impact the motor insurance market, Shell and Telefonica that will be learning how the technology might impact their sectors and the University of Greenwich who will be researching how people might interact with driverless vehicles.

Project lead Nick Reed said: “The innovative Gateway project will help place the UK at the forefront of the rapidly emerging sector of research and development related to automated vehicles. Through the strengths of the consortium and the project location within Greenwich, we can start addressing the technical, societal and legal barriers to automated vehicles and create a world class, technology-agnostic testing environment to help deliver the future of urban mobility.”

Along with Bristol, Milton Keynes and Coventry, the Greenwich project is building on the research work begun last year by Oxford University in partnership with Nissan.

RAC spokesman Simon Williams added: “The Government would do well to produce a green paper or substantial weight of research that explains in detail the benefits to the public of the new technology, and a framework for its phased introduction beyond merely these trials. That way motorists could get a much clearer sense of what a driverless future could look like.”