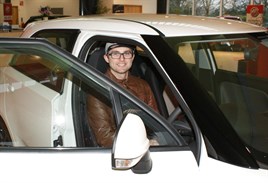 Jordan will contest the Dunlop MSA British Touring Car Championship this year in an MG Triple Eight Racing MG6 and while off the track he’s behind the wheel of an MG3.

Jordan said: “I don’t want this to sound too gushing and fake, but the MG3 is probably the nicest road car I’ve ever used.

“For under ten grand, it’s an excellent run around, and my Dad loves it. He’s actually really tempted to go and get one; the quality, performance and value are great. It’s a super little smart car.

“I use it all the time, it’s a great little car and it packs a punch.”

In the last 12 months the number of MG dealers has almost doubled. There are currently 56 MG dealerships and 10 after sales outlets across the country. More dealers will be appointed in the coming months.