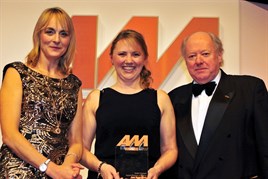 Swansway achieved the triple at the AM Awards with this accolade for Jane Hargreaves and for the second year in this category men have been put in their place – second place.

As brand manager, this former dealership accountant has led a £400,000 profit turnaround in three years with a collaborative approach that shows as much care for her staff as she has for her customers.

One of the biggest challenges she has overcome is selling from a remote location, by exploiting the internet to become a nationwide sales outlet. The majority of used stock is sourced from Volkswagen stock, all cars are listed on the website and the majority are pre-sold before they arrive on site.

This has led to an out-of-area sales boost, with the internet accounting for 60% of sales. Average used car sales are 65 units a month, with a resultant boost in aftersales business.

From being 182nd in the Volkswagen balanced scorecard, Wrexham ended last year at number two for new cars. It was number one for used cars.

Even within the context of its increasing profitability, Swansway said this was exceptional. Hargreaves said: “Ultimately I want to build a team at Wrexham Volkswagen strong enough to move forward without me, so if a new opportunity is offered to me, I could be confident the business would keep moving the right way.”

AM Poll
How has the COVID-19 pandemic affected your attitude or mental health? Please leave a comment
Vote
View all
2493