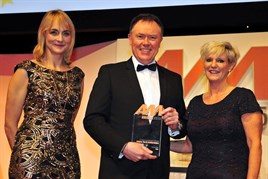 A previous winner in this category, Knights continues to seek improvements, according to the judges. In this particular case, Knights took considerable risks in the process, with its mould-breaking ‘open all hours’ policy.

Knights recognised that while other retail sectors had moved on, dealers were still operating with opening hours that had not changed much since the 1950s. Opening hours have been extended to 9pm most days of the week (with a service night shift operating till 2am), and until 5pm on Saturday and 4pm on Sunday.

There were challenges from the outset. During a detailed and comprehensive staff consultation process, while 91% of employees understood the need to change, more than a third didn’t want to work the new hours, and 15% appeared ready to leave immediately after opening hours were extended.

Knights devised rotas to ensure no one worked more hours than previously. Staff work no more than five days per week and have more time off than under the previous rotas. Pressure points have been reduced and, despite some resignations, staff satisfaction has improved. For customers, the benefits of being able to drop off and collect their car earlier and later have been obvious.

Customer satisfaction levels at the weekends have topped 100%. Workshop utilisation is at 98%, productivity at 97% and efficiency  is at 101%.