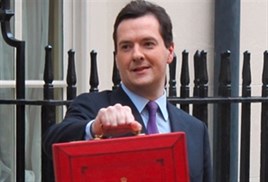 Budget 2015 highlights, 59 minutes in length - and 50 days from the general election.

> Company car tax rates for 2019/20: The appropriate percentage of list price subject to tax will increase by three percentage points for cars emitting more than 75 grams of carbon dioxide per kilometre (g/km), to a maximum of 37%, in 2019/20.

> Van benefit charge: April 6, 2016 the main van benefit charge (VBC) will increase by RPI. As announced at Budget 2014, the Government will extend VBC support for zero emission vans to April 5, 2020 on a tapered basis

> no duty changes on tobacco. Beer duty down 1p per pint (for the third consecutive year), cider by 2%, duty on Scotch whisky and other spirits by 2%, wine duty frozen

> The Government is investing up to £600m to deliver better mobile networks, and is announcing a new ambition that ultrafast broadband of at least 100 megabits per second should become available to nearly all UK premises in the country

> The pension lifetime allowance will be reduced from £1.25m to £1m from next year, saving around £600m a year

> in 15 years we have the potential to have the biggest economy in Europe, ahead of Germany

> Cuts required in the next parliament: £13bn from government departments, £12bn from the welfare budget, £5bn from tax avoidance/evasion

> Squeeze on public spending to end a year earlier than planned, so 2019/20 spending grows in line with the growth of the economy. This will bring state spending as a share of national income to the same level as in 2000

> Chancellor George Osborne: "Under this government, 1,000 jobs have been created every single day." He promises more apprenticeships

> The Office for Budget Responsibility (OBR) reports that Britain's growth in 2014 was 2.6% - "faster than any other major advanced economy in the world last year"

Matthew Hodgson, partner UHY Hacker Young: “The Chancellor’s Budget statement today talked widely about the continuing upturn in the UK’s economy, but provided no real additional stimulus for the automotive sector apart from an announced £100m investment in driverless technology, coupled with a slower than expected rise in benefit in kind charges for electric vehicles.

"Despite the overall upbeat economic appraisal from Osborne, we are aware of an increasing disconnect between the reported level of vehicle registration activity and 'on the ground' dealer financial performance.

"Targets for the first quarter are proving difficult to achieve, and we remain concerned that significant self-registration activity will result with all the attendant disruption this will entail moving forwards.

"With margins therefore remaining tight and maintaining year on year profitability questionable, what remains true is that focusing on tax efficiencies and reducing tax risk in dealerships is as important as ever.

"We are seeing increased HMRC activity in the sector, driven by the Chancellor’s ever increasing appetite for tax revenues, and we would continue to push for dealers to pay more attention to this critical area of their business.”

John Cridland, CBI director-general, said: “Stability and consistency are what businesses need to grow and prosper. This Budget sets the tone, providing a clear plan for fiscal health and growth.

“This Budget has some encouraging measures to help businesses create jobs for the benefit of all.

“The brighter fiscal picture has allowed the Chancellor to recalibrate his deficit reduction plans. In the next parliament this fiscal breathing space should be used to achieve intelligent reductions in public spending, together with much-needed infrastructure and innovation.

"With business investment a crucial driver of growth, the Chancellor has signalled his intention to continue the annual investment allowance. We want it to be made permanent in the Autumn Statement at £250,000 - this will fire the UK's economic kiln by spurring smaller firms to invest in plant and machinery.

“The reduction of the headline rate of corporation tax to 20% next month, is a meaningful step in making the UK the most competitive tax regime in the G20 and will help to attract investment.

“The oil and gas industry, which supports 450,000 UK jobs and is a major contributor to GDP, has been given a much-needed boost with the reduction to the supplementary charge and other incentives. This will help address concerns over job losses and investment freezes, but pressures remain due to low oil prices.

“Giving savers greater freedom over their pensions, including creating a secondary annuities market, boosts choice but after a period of flux what's needed now is breathing space for the industry and consumers to get to grips with all the changes.”

Rupert Pontin, Glass's head of valuations: "This seems to be a structured, sustainable and fiscally neutral budget albeit with some significant gimmicks around savings and personal taxation.

“There is interesting and welcome support for the UK automotive industry in the shape of £100 million contribution for the development of autonomous vehicles to keep us ahead in this area of development for this market. This has the potential to be a crucial area in the future.

“In the shorter term, freezing fuel duty is also helpful while additional support and incentives for green and hybrid technology from a business taxation perspective is also interesting given the carbon emissions to which the UK is committed.”

ASE chairman, Mike Jones: "Today the Chancellor championed the automotive industry as a key success story in the UK’s economic growth and introduced policies that will directly impact it. Briefly these include:

Alastair Kendrick, employment tax specialist at MHA MacIntyre Hudson, said: "Annuity arrangement changes might mean people decide to spend pension money on a car. But given the closure of parliament next Friday ahead of the General Election, there has not been the opportunity to introduce any majro changes to legislation. And while there was not much material in the Budget of note to the sector, we would expect more significant changes to legislation post election and the June budget will offer more substance."

James Tew, iVendi chief executive, said: “This Budget was always going to be something of a non-event in motor industry terms simply because of the nature of the Coalition and the fact that the public finances are so tight.

"Perhaps, however, no news is good news. What all new and used car businesses want in the post-recessionary economy is a steady period following several years of turbulence. We should all be hoping that the outcome of the General Election provides a similar level of stability that will give the economy the best chance of continuing to recover during the next few years.”

Kyle Truman, head of marketing at Epyx, said: “It has been many years since there has been genuine news for fleets in a Budget. We have become accustomed to a gradual refinement of existing policies such as the benefit in kind taxation system. This Budget very much continues along that line of thought. While the newly announced 2019-20 BIK rates are something of a jump, they at least represent a well-signposted plan to encourage lower emission company cars through to the end of this decade.

“A much more interesting question is whether this policy of stability will continue after the General Election. We are told that the result is likely to be close and that new coalitions could be created. While the attitudes of the major parties towards fleets are well known and probably unlikely to change dramatically, the attitudes of smaller ones that may suddenly hold a large amount of power is pretty much unknown.”

Ian Simpson, sales and marketing director at The Warranty Group, said: “As expected, there is little in here that will impact on the motor industry in any fashion in the short term. The changes in personal tax allowances are a small giveaway but probably not be enough to sway anyone considering changing their car while the holding of fuel duty is welcome but again will have a limited effect.

"Really, this Budget is just a sideshow on the way to the General Election and the best thing that can happen there is a decisive result. A hung Parliament or one that is run by a less-than-cohesive coalition would probably erode the consumer confidence that we have seen building over the last couple of years and have a more discernable effect on the new and used car markets.”

Mike Hawes, Society of Motor Manufacturers and Traders' chief executive, said: “The £100m injection into connected car research, development and testing – to be matched by industry - will provide a vital boost to the UK automotive industry and put us ahead in the global race to build the cars of the future. It is tremendous news that government has adopted SMMT and industry’s call for this investment – it lays the foundations for the UK to become a centre of excellence in intelligent mobility, and underlines the importance of automotive engineering to the UK economy.

“In addition, we’re pleased that government has recognised the importance of China, which is now the automotive industry’s biggest export market. Sales of British-built cars there have grown seven-fold in the past five years. This funding will help us to further capitalise on this opportunity, and strengthen the significant work SMMT is doing to grow the UK automotive presence in China.”

"The Chancellor announced a rise of the personal tax allowance which will raise the personal income allowance to £11,000 and will see a rise to £10,500 from April 2015. Employees with an annual salary below this amount are exempt from taxation - workers with a different salary will see a modest tax cut.

"The NFDA is also pleased to see an increase of the national minimum wage to 3% for adult workers, as this is the biggest rise in seven years. The rise by 20p an hour to £6.70 will offer more financial security to workers. By 2020 the minimum wage is set to be £8 an hour. The corresponding increase in the minimum wage for apprentices will be offset by the abolition of national insurance."

Jonathan C Riley, partner, national head of tax at Grant Thornton: "The Budget speech was primarily aimed at neutralising claims from the main opposition parties that the Conservatives were planning to take public spending back to levels last seen in the 1930s. Osborne’s focus was on at least denting, if not demolishing this claim and at the same time knocking opposition taunts of helping the rich, not balancing the benefits of recovery amongst the many.

"From a business perspective, the Budget was light on new measures but announcements included:

• confirmation of no National Insurance contributions for the younger workforce and apprentices
• a delay of any decision around maintaining the annual investment allowance at its higher level of £500,000 per annum until the Autumn Statement later this year
• tweaks to assistance from UKTI on exports
• a review of business rates.
Overall, many measures that could really liberate growth amongst business were put off.

"Whoever forms the government after the next election needs to act quickly in their first Budget, to stimulate exports, encourage further investment in innovation and skills, and critically simplify the tax regimes we operate within, for example a move towards harmonising the starting point for National Insurance contributions with that for income tax – a measure that would take many lower paid out of all taxes."