Tim Tozer: Vauxhall is not in a race to beat Ford 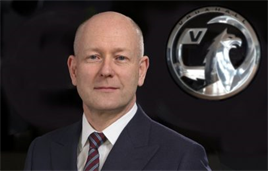 Vauxhall is not interested in ending four decades of UK new car market domination by Ford.

The revitalised GM subsidiary has dropped its bid to overtake its arch rival in Britain by the end of next year, Fleet News reports.

"I'm not saying we are not ambitious for our business and the way it develops and grows as it moves forward - I am just not going to make stake-in-the-ground statements for their own sake because they're not necessary," said chairman and managing director Tim Tozer (pictured).

In an interview on the eve of the Geneva Motor Show, he said GM would release 27 new models, 17 new power units and a number of new transmission systems over the next three years.

"We have great building blocks right now but there's a lot more to come because our business is being treated very seriously by our parent company,” he said.

"But my answer to what has been said about us taking over as market leader is that we will run our business properly in order to achieve our plans. I'm not interested in a race to beat Ford for its own sake - if I wanted to do that I could do more rental business.

"I am not in a race with Ford; what we will do is sell the very fine products we have that offer great cost of ownership figures. While I don't underestimate the competition, the Insignia is well able to compete with the Mondeo and Passat," he said.

Asked about his predecessor's claim to be achieving market leadership by next year, Tozer replied: "I have no wish for our business plans to go into the public domain and I can't hide my surprise about that happening. I am going to be measured on something that I think can be achieved.

"We will grow. We have dealers who are very attuned to the fleet market and we will be stronger because they know precisely what fleet drivers need in terms of service and relationships. We have a journey to make Vauxhall more desirable and aspirational, but the brand will always represent good value and be in the heartland of the market."

Vauxhall’s fleet sales director James Taylor recently told Fleet News however, that the company was actually targeting the top spot in ‘true fleet’ and other profitable segments of the car market.

Last year Vauxhall edged further ahead of Ford, but still lay behind Volkswagen, after registering 75,054 cars, up just above 10,000 on 2013, giving it just over 9% of the true fleet market, according to SMMT figures.

> In 2013 Steve Girsky, interim president of GM Europe and chairman of the Opel supervisory board, said at the Geneva Motor Show that Vauxhall could overtake Ford in the UK in the next three years.

“The objective is to be the best automotive company in the UK, whether you measure it through customer experience and satisfaction, brand loyalty or advocacy, or a combination of factors,” he said.

“It’s not just about being number one in the market, it’s about being the best in as many areas as we possibly can. We have a very strong documented objective to achieve this: it’s not written on the walls, but we have an absolute goal.”

And when will this have happened? “Probably 2016-ish”. Read the full interview in the AM archive.