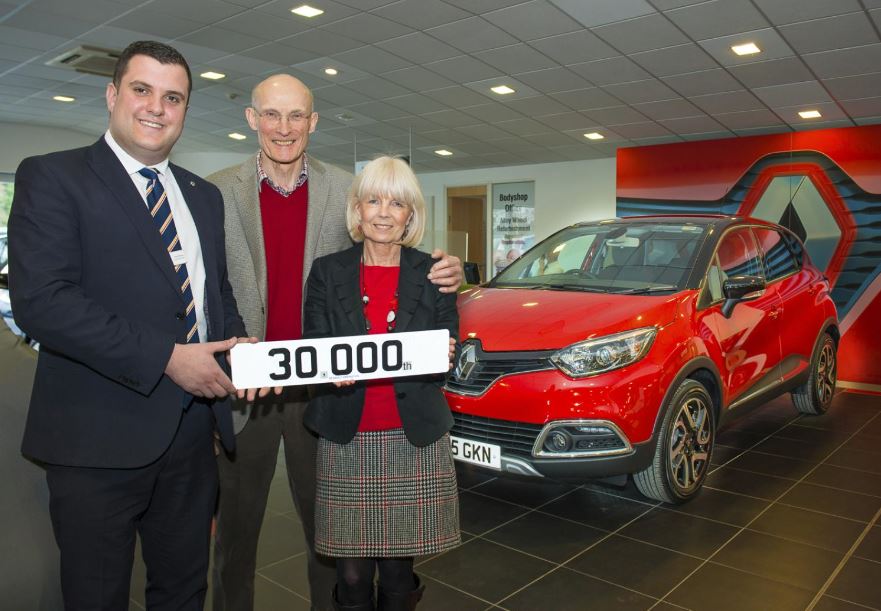 Renault has hit 30,000 sales of the Captur urban crossover in the UK.

Richard and Norma Watters, a couple from West Malling, Kent, collected the keys to the model from local dealer RRG Renault Orpington.

The excited couple chose the Signature TCe 120 Auto EDC model after falling for its elevated ride height and comfort.

To mark the special occasion the couple were presented with a voucher for £300 from Renault UK towards the cost of Renault accessories, as well as a bouquet of flowers and a bottle of wine.

Mrs Watters, said: “When I saw the Captur I really loved the look of it and then, after a quick test drive I knew it was the car for me.

“It’s exciting enough just to be collecting the car but knowing it’s the 30,000th sold in the UK and a bit of a landmark car makes it all the more special.”

General sales manager at RRG Renault Orpington Paul Davis said: “In a short space of time the Captur has become one of our most popular and in-demand models, and the Captur Signature is something really special. We can’t wait until its big brother, the Kadjar, arrives in our showroom this autumn.”

On sale since July 2013, the Captur has become one of Renault’s most popular models and is now the brand’s second biggest seller in the UK.

Its success has given Renault a growing presence in the important crossover segment. This position will be strengthened in the autumn with the eagerly anticipated launch of the Captur’s bigger brother, the Kadjar.