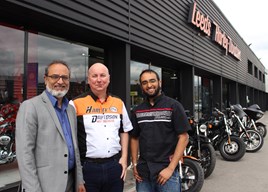 North East-based Jennings Motor Group has added its first motorcycle dealership with its acquisition of Leeds Harley-Davidson in West Yorkshire.

“We are embarking on a completely new and exciting business venture and we are looking forward to further developing the highly prestigious brand on both a local and national level, in addition to increasing business across new and used sales, service, parts, accessories and merchandise.”

Leeds Harley Davidson had been operated since 2012 by Legend Motorcycles, of which Khan’s son Sohail was managing director. He is also a director of Jennings.

Legend had re-established the franchise in the city after its previous operator, Summer Retail, put the business into administration in 2011.

The acquisition marks a diversification for Jennings which has focused on car and van retailing for years, although the business was founded in the 1890s as a bicycle repair operation.

Jennings was initially focused on Ford but expanded in the last decade to add Kia, Mazda, Seat and Mitsubishi, and it now has a workforce of 433 people.