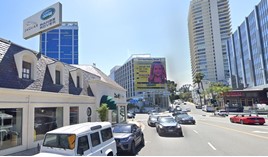 Pendragon has agreed the £27.4 million sale of its Jaguar and Land Rover franchised car dealership in Los Angeles, California.

The news comes seven months after the group completed the £16.5m sale of its Chevrolet dealership in Puente Hills, California, and 17 months after the disposal of its Jaguar Land Rover (JLR) businesses in Mission Viejo and Newport Beach, California, as part of a bid to retrieve £100m from its operations across the Atlantic.

In a statement issued via the London Stock Exchange this morning (September 7), the AM100 retail group confirmed that it had agreed to dispose of the trade and assets of its Jaguar and Land Rover motor vehicle dealership located in Los Angeles on September 4.

The purchaser of the business is privately-owned dealership group Triunity Automotive Group.

Pendragon said that the consideration for the transaction is expected to be approximately £15.8m, subject to completion adjustments, to be satisfied entirely in cash payable at completion.

The statement said: “As at 31 December 2019, the gross assets that are the subject of the Transaction amounted to £27.4 million and the profit prior to central costs amounted to £0.3m.

“The proceeds of the Transaction will be used for general corporate purposes.

“Completion of the Transaction is subject to a number of conditions, including, inter alia, the purchaser obtaining OEM approval.”

Last week Pendragon announced its plan to rebrand and restructure its Car Store used car division while driving digital innovation in a new growth strategy which it hopes will deliver an underlying profit before tax of £85m to £90m by 2025.

The group has already implemented changes that will achieve savings of £37m-per-year and today outlined its plan to leverage greater efficiency through increased digitalisation while growing its Pinewood DMS business and re-vamping its used car offering.

Pendragon’s statement said: “During FY19, the Group reviewed the existing proposition and closed a number of Car Store locations that were not viable, and improved the performance of the remaining estate.

“The next stage of the development of the physical used car proposition will be the creation of larger-footprint, purpose-built facilities in targeted locations to provide both stocking points, customer retail and collection points and fulfilment hubs for home delivery.

“Over the next five years we are targeting the development of eight physical locations at an approximate capital cost of £7.5m per location.

“We believe that a combination of a digital proposition and these physical stores will allow us to gain a meaningful share of the target market.”