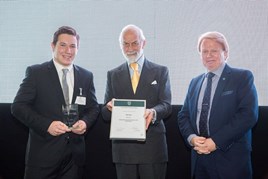 The IMI celebrated the achievements of automotive professionals, students and training providers at their awards ceremony which took place at Silverstone.

Allen was nominated by Volvo Training and Development for the award.

Currently training with Sturgess of Leicester, Allen joined the dealership in 2008 as a trainee sales executive before moving over to become a technician and joining the Volvo Service Apprenticeship programme in 2011.

Allen has now finished his apprenticeship, qualifying in August 2014, and is now working towards Level 3 status at the Almond Road dealership.

Chris Sturgess, chairman of Sturgess Motor Group, said: “Will has so much dedication, commitment and passion for his role and progresses on a daily basis.

“On behalf of all the team at Sturgess, I’d like to congratulate Will on a truly outstanding achievement.”

His Royal Highness Prince Michael of Kent, who is patron of the IMI Group, attended the event and commented that all finalists “reflect the passion and dedication that is at the heart of the IMI's approved centre network".