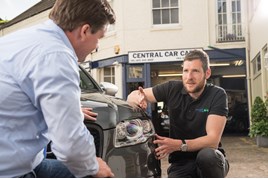 WhoCanFixMyCar.com has released data it has collected on repairs carried out throughout the year to reveal key seasonal trends.

Data shows that electrical maintenance will increase in the winter months, with a peak in January.

Alex Rose, WhoCanFixMyCar.com marketing director, said: “Cold weather unquestionably increases strain on batteries and other electrical components, but by how much?

“The answer is, the work more than doubles, comparing January to June, and the trend actually begins earlier than you might think, in the autumn, sustaining right into April.”

According to Rose, the pattern isn’t caused purely by requests for new batteries which, at most, make up 16% of the electrical work the website sees in a given month.

Instead, alternators, lighting and other electrical faults or gremlins are what really peak on WhoCanFixMyCar.com during the winter.

Rose suggests dealerships could advertise electrical expertise and experience, or a free electrical diagnosis until the clocks go forward.

Winter also increases demand for suspension and steering work, possibly due to more potholes appearing on the roads during the colder months.

According to WhoCanFixMyCar.com’s data, requests for suspension and steering repair work increase by around 75% comparing December and February/March/April. Coil springs, shock absorbers and tracking all follow the same trend.

Unsurprisingly, the demand for air-conditioning work (most commonly regassing) spikes in the summer, with a 10 fold increase in July, relative to February.

The data also shows that while there are spikes in servicing for vehicles that were registered in plate-change months of March and September, that spike continues into the April and October as customers lag behind with getting their vehicle booked in.

Requests for servicing work increase by 60% in September, verses a month like May.

Rose suggests promoting servicing and MoT during the plate-change months, but continuing to do so in the months following on from that too.

WhoCanFixMyCar.com also shows that demand for mobile mechanics is on the increase, going from under 1% or requests in January 2012 to nearly 8% of requests now.

Rose said: “With Amazon offering delivery within the hour, and Deliveroo cyclists seemingly at every set of traffic lights, consumers are seeking ‘convenience’ like never before - and these expectations will feed into all aspects of their lives, including car ownership.

‘When a few taps on a smartphone brings an Uber to my door, why should I drive to an unfamiliar location - and arrange my own transport - for something far more costly, such as car maintenance?

“This will increasingly become a driver’s mindset. Garages that offer a truly mobile experience - or car collection and delivery - will have the advantage, as our data clearly shows.”