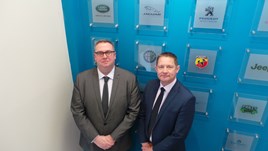 Swansway Group has reported record aftersales performance for the first quarter of the year.

The success has been driven by a change in process across the business, including the recently restructured retailer support centre, which, with only three more staff, (now numbering 19), generated £1 million more revenue than in the same period in 2015.

Service bookings were up 54% for the first quarter.

“Staff were grouped into teams dedicated to specific brands, split into inbound and outbound teams, led respectively by Kerry Horsfield and Simon Williams and our operation became more slick.”

“The biggest change was the uplift in data quality, led by the marketing team. Emailing to the right people at the right time has massively increased our ability to convert email reminders to real-time bookings.

“We believe this record breaking first quarter is just a taster of the year to come, as the improved data quality continues to drive bookings”.

Dealerships across the group have been involved in cleansing and up-dating the group’s database, with overall data quality now at almost 90%.

Swansway aftersales director Paul Woodhead (right) said: “This first quarter has been a record breaker for our business, all the processes which we’ve put in place have come to fruition and the excellent results speak for themselves.”