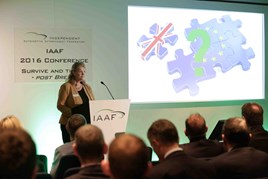 The Independent Automotive Aftermarket Federation (IAAF) announced the appointment of Andy Savva as its new vice-president after exploring the theme ‘How to survive and thrive post Brexit’ at its annual conference.

Savva, a former winner of the ‘National Independent Garage of the Year Award’ with 30 years of automotive aftermarket experience, will support current president Lawrence Bleasdale and chief executive, Wendy Williamson, before taking over as president in 2017.

He said: “I have always thoroughly supported the work IAAF carries out to the benefit of the aftermarket and I am really looking forward to my term as president.

“The aftermarket has many challenges ahead that need to be addressed with belief, commitment and courage by all of the industry’s stakeholders if we wish to overcome them.”

At the IAAF’s December 15th conference, held at the ICC in Birmingham, Williamson opened proceedings summarising the political impact of the past year such as that of Brexit, while reassuring members that the federation is now looking to the future and exploring how it can embrace the changes and continue to thrive.

Amonbg the speakers on the days were: Frost & Sullivan’s Niranjan Thiyagarajan; Iain O’Brien from Triple Wood Associates; Julian Lloyd, from ProVQ, IAAF’s newest member; Neil Pattemore, from FIGIEFA; Alexander Haid, from TecAlliance; and IAAF president Lawrence Bleasdale, who brought the proceedings to a close outlining the key messages of the conference.

Williamson said: “As an industry we still face a number of threats with technological advances continuing to enter the market, as well as facing challenges of the changing economic climate and therefore it is more important than ever that we continue to work alongside FIGIEFA in Europe post Brexit.

“However, despite this year full of change we are making progress and will face all threats head on while continuing to search for solutions.”