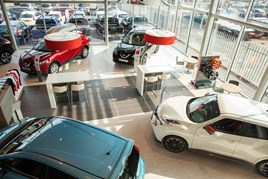 Nissan GB's car dealer network has seen a 66% rise in dealer profitability in Q2 of 2015 after the brand made a commitment to boosting returns.

The car brand made a commitment to improving dealers' returns earlier this year and from Q2 has achieved a rolling 12-month 1.5% average return on sales for its network, which has begun the roll-out of a new showroom style, Nissan Retail Concept (see gallery below), involving interior updates and new customer-facing technology.

The number of loss-making dealerships has halved and 35% of the network made a 2% RoS.

"We're asking them to make significant investments in the future of the brand and it's important they see a health return."

In the Winter 2015 Dealer Attitude Survey by the National Franchised Dealers Association, the overall value of Nissan franchise scored 5.6 out of 10, continuing a decline start started in summer 2013 when it scored 7.3. Franchisees who participated in the NFDA survey rated Nissan’s volume aspirations, target setting process, and inducements to self-register vehicles below the 5 out of 10 mark.

Lewis suggested the NFDA results were a distortion and pointed out that since 2011 there has been a significant shift in the Nissan network, with 25% changed and some significant dealers under termination.

He added: “I’d be really disappointed if it wasn’t corrected (in the next survey).”

He said since he came back to Nissan in February he has seen the relationship between Nissan and its dealers, and their profitability, and listened to what are the remaining issues. He added: “I’d like to think the evolution of the business will reflect in some much better results next time.”

Dealer communications have improved, with webinar Q&As, videos, and a new format dealer conference in May. Each month two of Nissan GB’s directors go out to the north and south to host a casual lunchtime meeting with 12 to 16 dealers, and the input from that is fed back to the board.

It also provides an opportunity to reinforce to them the progress being made. By the end of June Nissan had record new car market share (6.1% retail share and 6% fleet share), was the fastest growing brand in the top 10, was 5th largest in the 2015 market, and its Qashqai had moved into the UK’s top five most registered cars.

“All that can remind people that all the hard work of the dealer network and ourselves to deliver that 1.5% has some great metrics behind it.

“We’re pointing all this out to the network in these regular communications, and then asking ‘what else? Where are the weak points, and what do we need to address?’ Because we’re very willing listen to all suggestions and see how we can implement them,” he said.

Prior to re-joining Nissan GB earlier this year, Lewis spent a year with Jardine Motors Group heading its Volkswagen, Skoda and Seat businesses. He said this has given him great insight into industry issues from the retailers’ perspective and enabled him to tackle some of the complexity in the relationship between Nissan and its dealers.

Compromises are often reached, however it is not always possible. “There’s always going to be an area where we have to agree to disagree, and we’re always going to want to stretch people, and maybe some will not be too comfortable with that journey.”

AM Poll
Which aspect of your business will require most focus in 2021?
Vote
View all
1179