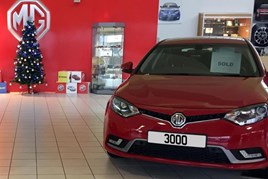 The brand celebrated this year’s results as the figure surpassed 2013 and 2014 registrations combined, but the manufacturer has some way to go to match its 2002 heyday – when it recorded almost 100,000 sales.

Matthew Cheyne, head of sales and marketing for MG, was optimistic about the brand’s current crop of results. He said: “We are delighted to have reached 3,000 registrations for this year.

“It is such a rewarding moment to exceed previous years, and we strongly believe that next year will be no exception; particularly with the 2016 MG3 and arrival of our new and exciting SUV.

“I would like to thank our dealer network for their continued efforts; it’s fantastic to be working with people who are so supportive of MG and always work hard to promote the brand.”

The MG brand can trace its history back to 1924.

The current MG6 and MG3 models are designed, engineered and finally assembled in Longbridge, Birmingham, with several models planned for the immediate and longer-term future.

This year’s growing sales figures come on the back of a scheme of dealer expansion for MG, with NT Shaw of Louth, Lincolnshire, becoming the brands 63rd UK outlet last month.