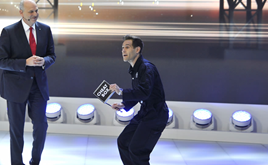 Dressed as a Volkswagen mechanic and holding a wrench and a prop labelled “cheat box”, Brodkin looked under a car on the VW stand as an executive spoke to journalists, reports The Guardian.

The prankster, who showered Fifa chief Sepp Blatter with dollar bills last summer, has turned his attention to a VW presentation at the Geneva motor show.

With a German accent, he said chief executive Matthias Müller “said it was ok as long as no one finds out about it”. Security guards then escorted the comedian away.

In July, Brodkin placed a pile of banknotes on the desk next to Fifa’s Sepp Blatter, having announced himself as a delegate from North Korea’s 2026 World Cup bid. As he was being led away by security he threw more notes over the still-seated president.