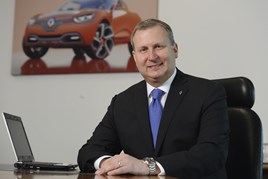 An irate Ken Ramirez, Renault UK managing director who takes up the reins as senior vice president, sales and marketing for Europe from April 1, has described the recent NFDA dealer attitude survey a “strange, perplexing result”.

Renault was ranked last in a question about recommending the brand to others, with a score of 4.2 (the average score across all brands was 6.6), while, on an overall rating, just three manufacturers performed worse than its 4.5 score (average score was 6.1).

“We’ve had trouble with the survey before because it included service centres which shouldn’t be ,” Ramirez told AM during the recent Geneva Motor Show. “But this result is inconsistent. We had other dealer events with investors coming in and there is appeal .”

Renault was voted franchise of the year by dealers in the 2016 AM Awards, and Ramirez claimed the performance of the network was strong last year.

“The profit of the network was the highest of any generalist brand in 2015, with average return on sales of 1.5% and a top quartile of 2.2%,” he said. “And we had the second highest sales per site.

“So, from our performance figures we see the facts. I can’t say that the survey is accurate – we’d question it.”

While searching for answers, Ramirez did suggest one explanation: “Perhaps they drive a political agenda through the survey. If so, it’s the wrong place to do it.”

In 2015 there were 19 new dealerships opened, 13 new investor partners signed up and the brand established a 26-strong specialist dealer network for Renaultsport.

Fifteen more dealerships are set to open this year.