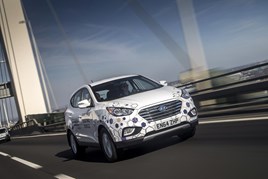 The announcement comes a week after Hyundai’s sustainable fuels development manager, Robin Hayles, told AM of the brand’s plans to name two specialist dealerships in London within the next six months and takes the total number of Hyundai ix35 fuel cell vehicles on UK roads to 15.

Those vehicles in the UK are already in use by Johnson Matthey, TfL, Air Products, ITM Power and Anglo American.

“It’s fantastic to be a part of Aberdeen’s hydrogen development in this way, especially because the cars are going to be used on a day-to-day basis by members of the public.

“We want them to experience all the reasons why we think hydrogen is the way forward in terms of usability, refinement and ultra-clean motoring.”

Aberdeen City Councillor Barney Crockett, who also chairs the European hydrogen association HyER, said: “Aberdeen is developing a reputation as a ‘can-do’ hydrogen city. With these cars, we are taking things to the next level, moving ever closer to becoming a world-leading renewables city and securing a hydrogen economy in Aberdeen, presenting tangible opportunities to the energy industry.”

The ix35 Fuel Cell is the first hydrogen car to go on sale to the public in the UK but has so far been sold direct to customers from Hyundai’s central office in High Wycombe.

But Hayles told AM: “Ultimately, there’s no reason why this car can’t be part of the dealership network’s offering.”