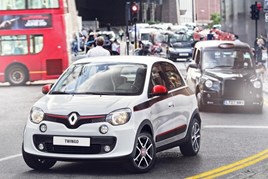 Renault is offering Londoners the chance to test drive one of a fleet of 70 Twingo city cars in a bid to win tickets to a secret concert.

The French manufacturer has teamed up with online music streaming provider Spotify to lure people into the vehicles, which will be based at designated ‘test drive hubs’ located around the capital, between April 20th and 22nd.

Those who take a test drive on the first day of the test drive event are in with a chance of winning tickets to the gig, featuring an as-yet secret artist, which will take place on Thursday evening.

James Boyer, marketing director Renault UK and Ireland, said: “Twingo is the ultimate city car – trendy chic, fun as well as incredibly practical, so what better way to show it off to Londoners than with the most creative city test drive ever, one that comes to you, and that can even get you access to a unique concert that is sure to be a fantastic night.”

David Rowlands, general manager Hertz UK, who have partnered with Renault to provide the test drive event, said: “The new fun and practical Renault Twingo is part of our rental fleet and we are delighted to partner with Renault to allow the public to experience it.

“It is exciting to be able to welcome those drivers who wish to try the innovative Twingo city car at our popular flagship branch at London Marble Arch.”