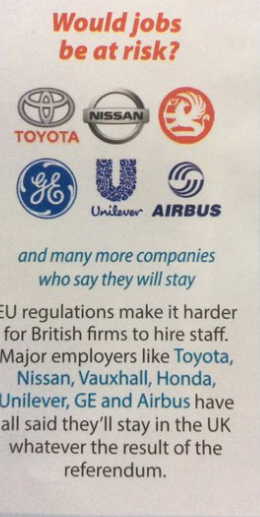 Nissan is taking legal action against the Vote Leave campaign after its logo was used on leaflets calling for voters to back Brexit in Thursday’s referendum.

Nissan said it was taking its claim to the High Court in London in order to prevent the Vote Leave campaign from making additional false statements about company's position on the European Union.

On one flyer the Nissan logo appeared next to those of four other companies, including Unilever and Vauxhall, with the message: “Major employers have all said they’ll stay in the UK whatever the result of the referendum.”

In February, Carlos Ghosn, Nissan’s chairman and chief executive, said: “Our preference as a business is, of course, that the UK stays within Europe – it makes the most sense for jobs, trade and costs. For us, a position of stability is more positive than a collection of unknowns.

“However, this is ultimately a matter for the British people to decide. While we remain committed to our existing investment decisions, we will not speculate on the outcome nor what would happen in either scenario.”

The Vote Leave campaign leaflets titled ‘EU myth buster’ produced by Vote Leave identified Nissan and five other multinational companies that it claimed would "stay in the UK whatever the result of the referendum."