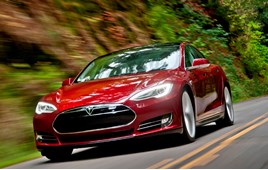 Tesla is being investigated by authorities in the US after one of its customers was killed in a collision with a lorry while using the Autopilot function in his Model S.

Officials from the National Highway Traffic Safety Administration are looking into the incident, on a highway in Florida in May, which led to the death of the man named by several American news outlets as Joshua Brown from Ohio.

The BBC reported that a video on YouTube, which appears to have been posted by Mr Brown, depicts a previous incident in which his car steers to avoid a lorry in the next lane.

Next to the YouTube post, Brown had written: “Tesla Model S autopilot saved the car autonomously from a side collision from a boom lift truck.”

Yesterday Tesla issued an official statement expressing its condolences to the 40-year-old’s family.

It said: “The customer who died in this crash had a loving family and we are beyond saddened by their loss.

“He was a friend to Tesla and the broader EV community, a person who spent his life focused on innovation and the promise of technology and who believed strongly in Tesla’s mission.

“We would like to extend our deepest sympathies to his family and friends.”

Tesla stated that the incident in which Mr Brown lost his life was “the first known fatality in just over 130 million miles where Autopilot was activated”.

“It is important to emphasize that the NHTSA action is simply a preliminary evaluation to determine whether the system worked according to expectations.”