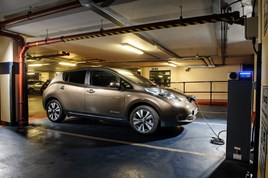 Nissan said there were 3,646 charging points in the UK in 2015 and the number of locations will surge to nearly 8,000 over the next four years, driven by EV market demand.

The number of fuel stations in the UK are still likely to have more pumps available for car drivers to use compared to charging points in 2020, but Nissan’s figures highlight the continued growth of the plug-in vehicle market.

Go Ultra Low, the joint government and car industry campaign, believes electric power could be the dominant form of propulsion for all new cars sold in the UK as early as 2027, with more than 1.3m electric cars registered each year. In the April-June period of this year, 38% more electric cars were registered compared to the same timeframe in 2015, building on a 27.4% pick-up in the first quarter.

“Combine that with constant improvements in our battery performance and we believe the tipping point for mass EV uptake is upon us. As with similar breakthrough technologies, the adoption of electric vehicles should follow an ‘S-curve’ of demand. A gradual uptake from early adopters accelerates to a groundswell of consumers buying electric vehicles just as they would any other powertrain.”

Whilst the vast majority of electric vehicle owners charge at home, 98% of UK motorway services have charging stations, including rapid connectors that can charge Nissan’s Leaf electric vehicle battery to 80% in 30 minutes.

The 30kWh Leaf, launched in January this year, delivers up to 155 miles on a single charge. Its engineers are working on new technology that could extend the range of future Nissan EV vehicles by 150%.