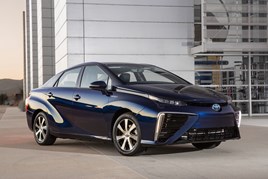 Long-range electric vehicles look to be on the agenda for Toyota after an apparent change in company policy.

A new range of vehicles capable of more than 186 miles could be on the cards by 2020 for the brand which had previously said that EVs would remain the preserve of short-distance commuters, according to a report by Reuters.

Toyota had continued to cite the high price of rechargeable batteries and lengthy charging times as the reason for not pursuing the same EV strategy as the likes of Tesla and the Nissan-Renault.

But the Nikkei business daily has reported, without citing sources, that Toyota would set up a team to develop long-range EVs in early 2017, Reuters said.

Toyota has not commented on the report, but has pledged to make all of its vehicles essentially emissions-free by 2050.

Takeshi Miyao, managing director of consultancy Carnorama, told Reuters: "Toyota has been a major hold-out on EVs, but it appears that it now realises that without them it may be difficult to satisfy tightening regulations.

"Not (including EVs as an option) would run the risk that it could face sales restrictions in some areas."

Toyota had been promoting its hydrogen-powered Mirai hatchback as its long-range zero-emission vehicle of choice, being one of just two manufacturers to offer a production FCV in the UK – alongside Hyundai’s ix35 SUV.

Last month Hyundai launched its first full-EV to the UK market in the form of the Ioniq, which claims a range of 174 miles on a full charge.