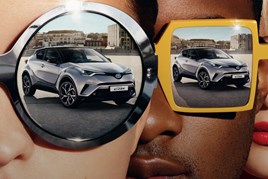 Toyota GB has commissioned one of the biggest advertising campaigns in its history to launch the C-HR crossover across TV, cinema, social media and display advertising.

A full, 60-second version of the advert will gain huge exposure when screened during the debut of The Voice on ITV on January 7th, with an expected audience of around 7.5 million people.

The advert will show a C-HR being driven through city streets, its looks reflected in the sunglasses of young and style-conscious passers-by.

A spokesman for the brand said: “The setting, tone and style of the ad are in tune with the younger market Toyota is targeting with its new model.”

The long version of the advert will also be used to reveal C-HR to cinema audiences, from January 27th, occupying a slot before the start of screenings of Danny Boyle’s highly-anticipated T2:Trainspotting sequel to his 1996 hit movie.

This is expected to deliver a reach of more than 2.3 million people over a five-week period.

More than 1,800 digital and static sites nationwide will also feature C-HR adverts, while social media activity will continue throughout the first quarter of the year to engage people with a wide variety of content, building awareness of C-HR and interest in test drive opportunities.

Andrew Culllis, Toyota GB marketing director, said: “C-HR is an important vehicle, not just in taking Toyota into the crucial compact crossover market, but also in attracting new customers to the brand.

“We are making a major investment in a multi-channel campaign that echoes C-HR’s contemporary style and intriguing qualities that will resonate with younger, discerning customers.”