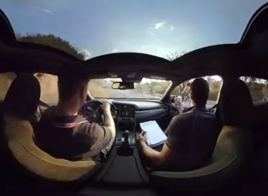 Honda is hoping to replicate the dealership experience through interactive online video ads.

At any point in the interactive videos, which will be hosted on Honda’s website as well as on YouTube, viewers can pause the story to get in-depth demos of features such as seating and interiors, according to Marketing Week.

The Civic ad also has a 360-degree video option, allowing viewers to get an idea of what it’s like to sit in the driver’s seat.A ‘buy now’ button flashes on the screen.

Furneaux said: “We know more and more people now make decisions in the digital environment and realised we weren’t meeting their needs with our digital content.

Furneaux said, unlike Hyundai and Ford, Honda has “nothing firm on the horizon in terms of driverless cars.

She said driverless cars were like drone delivery, in that it will take “years of legislation and social change” before it becomes a reality.

“Urban areas are such busy environments so there’s the concern of how driverless will work around other drivers, just as there is with delivery drones and privacy. There’s still so many unknowns and things to be considered before we move in any firm direction.”

Honda and Hitachi to embark on EV drivetrain joint venture

Honda and Hitachi to embark on EV drivetrain joint venture