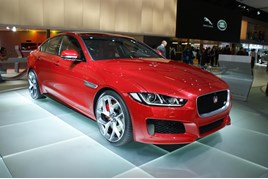 Jaguar’s promotion of the in-car technology in its XE has been criticised by the advertising watchdog for jeopardising safety.

A paid for piece in the Guardian on September 24 last year promoted the use of the car’s technology and infotainment features while driving.

Jaguar believed the advertorial did not encourage dangerous driving and that it had specifically stated that any of the described functions of the car should be used ‘without compromising safety’.

It said the advertorial was generally aimed at making ‘productive use’ of time in the car (subject to the preliminary safety message) by using the available functions that enabled the driver to ‘work’ on the move via hands-free communication as the law expected.

But two complainants objected to the advertorial because it encouraged unsafe driving practices.

The ad must not appear again in its current form or in future “encourage drivers to carry out such tasks that were likely to distract their attention from the road, making them incapable of having full control of the vehicle”.

The ASA said it understood the advertorial was aimed at business executives and primarily promoted a car that included features allowing the driver to carry out work related tasks via hands-free technology and claimed this could be done “without compromising safety”.

It accepts that driving whilst using a hands-free mobile phone kit was not, of itself, illegal.

“However, we noted that the Highway Code stated that using hands-free equipment was likely to distract drivers’ attention from the road and advised that they used a voicemail facility and stopped to make or take calls,” the ASA ruling said.

“The Highway Code also advised there was a danger of driver distraction being caused by in-vehicle systems such as satellite navigation systems, congestion warning systems, PCs and multi-media.

“We understood from The Highway Code that drivers could be stopped by police if they were considered not to be in full control of a vehicle because of being distracted, which could result in a motoring offence. This also applied to vehicles stopped at traffic lights or queuing in traffic.

The advertorial featured the headline claim, “drive time is no longer down time”.

“We considered readers would interpret this to mean that drivers could now perform various other tasks whilst driving.”

“Whilst we understood that the work related activities and communicating with family could be carried out in the car via hands-free technology, we considered that they were likely to distract a driver’s attention from the road and therefore preventing them from having full control of the vehicle.

Therefore, we concluded that the advertorial was irresponsible because it was likely to encourage unsafe driving practices.”