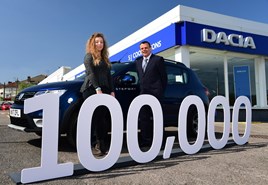 Dacia has celebrated the sale of its 100,000th model since the launch of the budget brand in 2013.

SJ Cook and Sons in Bristol made the landmark sale of a Sandero Stepway TCe 90, in Cosmos Blue metallic, to take the manufacturer to six figures.

The car was Heather Reiss’ second Dacia in three years and she received a warm welcomed from James Hardiman, sales manager at SJ Cook and Sons and Jeremy Townsend, communications director, Groupe Renault UK, when she attended the dealership for her handover.

Louise O’Sullivan, head of Dacia UK, said: “Dacia was launched in 2013 and straight away we had great public interest in the brand.

“In four years the Dacia community has built up significantly thanks to the annual Dacia Day, a Dacia owners club and major brand partnerships like our one with the Rugby Football League.

“Loyalty to the Dacia brand has never been higher as we’re starting to see many customers, like Heather, returning to the brand to trade their old Dacia in for a new one.”

James Hardiman, sales manager at SJ Cook and Sons, said: “We’re very pleased that Heather chose to come back to SJ Cook and Sons for her second Dacia and we’re excited that the 100,000th model in the UK was at the dealership.

“The brand has proved extremely popular for the dealership since launching in 2013 and we have found that customers enjoy the robust, no-nonsense simplicity of Dacia vehicles.”

Over 94% of Dacia sales are to retail customers, the brand revealed, and car spotters are most likely to spot a Dacia in Scotland than anywhere else in the UK, with a Scottish market share of 4.2%.

Sandero Stepway is the most popular Dacia model bought with 35% of all Dacia sales and the TCe 90 is the most popular under the bonnet of the Dacia range, with Pearl Black proving the metallic colour of choice with 36% of UK customers choosing the shade for their vehicle.

White is the most popular non-metallic colour.

Inflation has not affected the brand’s aggressive pricing strategy, either.

Billed as the UK’s most affordable new car, the Sandero Access is still priced at £5,995 four years after it was first launched.