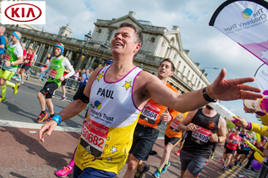 Both charities have their head offices near Kia’s Walton on Thames, Surrey base.

Philpott said: “Completing the London Marathon was a fantastic experience it was a privilege to take part on behalf of The Children’s Trust.

“I was humbled by the generosity of family, friends and colleagues in the industry and I know this money will make a huge difference to the lives of young people with brain injuries.”

Appleby said: “It has been a hard year building up to the marathon – but worth every minute. Kia considered Shooting Star Chase as a possible charity partner and I was so struck by their work that I felt I had to do something personally to support them.”

Neither were committed runners before deciding to undertake the challenge.