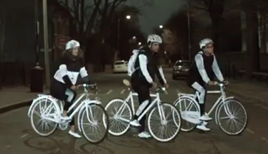 Volvo has been barred from showing an ad for reflective safety paint after it was judged to be misleading and confusing to consumers.

Video ads – on YouTube and on Volvo’s website – in November showed cyclists applying LifePaint on their bikes, clothes and safety gear before cycling in the dark. The LifePaint sprayed areas glowed in the dark.

A complainant did not believe the product could produce the effects shown, claiming the ads were misleading. And watchdog, the Advertising Standards Agency agreed when Volvo admitted LifePaint was primarily for use on clothing – and another paint, Albedo 100, had been used on the bicycles.

It said LifePaint could also be used to produce the same effect shown in the video on bicycle frames, although the effect would not last for long and it would need to be reapplied sooner, or coated, so Albedo100’s oil-based spray was more suitable.

Its use had been pointed out on the Volvo website, but not prominently enough, according to the ASA.

“The video gave equal prominence to the frames of the bicycles as it did to the clothing of the riders, and showed the product being sprayed on a bike frame, so we considered consumers would expect the product to work on both surface types,” it said.

"Although we acknowledged that the video provided by Volvo showed that the product did initially produce a reflective effect when applied to metallic surfaces, we also understood that the effects shown on the bicycle frames in the ad were achieved with a different product."

"The ad exaggerated the performance of LifePaint and was misleading."