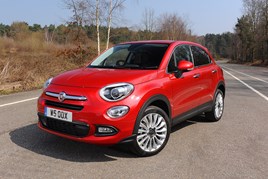 FCA Group will phase-out production of diesel cars as part of a decision to ditch the fuel completely by 2022, it has been claimed.

The Financial Times reported that the Abarth, Alfa Romeo, Fiat, Jeep and Maserati producer had planned to formally announce the measure - similar to that planned by Toyota and recently revealed by Honda - in June.

The newspaper said that the decision had been made despite the FCA Group being the only “big carmaker” in Europe to register a rise is diesel sales share in 2018, in part because of its exposure to the Italian market.

FCA Group would not comment when AM called today, but the FT claimed that the OEM’s decision had come as a result of the rising cost of making diesel engine technology compliant with increasingly tight emissions rules.

New EU emissions rules could see the cost of developing diesel engines rise by 20%, it said.

Reports that the FCA Group’s strategy is set to change comes after Volkswagen-owned Porsche removed the Panamera and Macan Diesel S models from its line-up, leaving its line-up without any diesel representation for the first time in almost a decade.

It also followed an AM interview with Honda UK managing director David Hodgetts in which he expressed the Japanese manufacturer plans to phase-out the fuel with each new model update.

Last year Toyota told the Financial Times last year it would probably not launch another model with a diesel engine.

And Hodgetts spelled out a similar plan for Honda shortly after the launch of a new 1.6-litre Civic diesel. He said: “The new CR-V will be launched towards the end of 2018 and that will feature our new hybrid powertrain, which replaces the current diesel powertrain in that vehicle. That will be a very clean car.

“During the current model run-outs we will keep diesel in all our cars, so Civic will have a diesel engine for the next three or four years, but when we get to a full model change, we will change to petrol and hybrid.”

According to Jato Dynamics sales of diesel vehicles in Europe fell 8% across Europe in 2017 as its market share fell to 43.8%, its lowest level for a decade.

Sales of petrol cars grew 11% to realise a 50% market share during the same period.