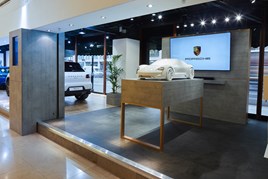 A scale model of the upcoming Porsche Mission E battery electric sports car is on show in a window display at Harrods in Knightsbridge.

Running from April 12 - May 16, the Porsche pop-up showcases both current and future road car innovations, in what is the 70th year of the marque.

Augmented Reality (AR) enables visitors to bring the Mission E to life, offering a virtual experience. As part of a collaboration with Google, Porsche has developed the AR app which allows the user to digitally discover more information about the car.

The Mission E concept car celebrated its premiere at the Frankfurt International Motor Show (IAA) in September 2015, and was given the green-light for production shortly after.

It will go on sale by 2020 and offers a system power output of more than 600PS. The four-door Mission E can accelerate to 60mph in less than 3.5 seconds and offer a range of more than 300 miles.

The Harrods pop-up will be hosted for the duration by colleagues from Porsche Centre Mayfair and Porsche Centre West London, two of the Centres which form the Porsche Retail Group.

Ade Smith, director of Porsche Retail Group, said: “Porsche Centre West London and Porsche Centre Mayfair are thrilled to showcase both the current and future of Porsche in such an iconic location. Our staff will be on hand to fully immerse visitors in all things Porsche”

Joining the display is the new 718 Cayman GTS and the Porsche Macan.