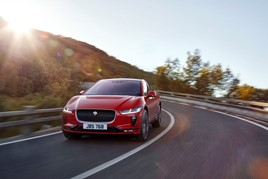 Jaguar Land Rover made a £264 million pre-tax loss in Q1 this year compared to a £595m profit last year due to a slow-down in Chinese sales, the car manufacturer's financial results have revealed.

Total revenue for the Indian-owned British car manufacturing brand fell by 6.7% to £5.2 billion for Q1 and earnings before interest, tax and depreciation (EBITDA) were £325 million (6.2% margin).

JLR invested £1.1bn in new vehicles and technology in Q1 and it said this led to negative operating cash flow of £1.7bn.

The company plans to invest in the region of £4.5bn in the current financial year.

While retail sales were up 5.9% to 145,510 vehicles overall globally during the three month period, sales in China fell by 13,950 units. China introduced a cut of import tariffs for cars and parts for most vehicles from from 25% down to 15% on July 1, which led to Chinese customers delaying purchases until after this date to take advantage of the price reduction.

Dr Ralf Speth, JLR's chief executive, said: “We had a pre-tax loss in the first quarter, reflecting the impact of the announcement of the duty reduction in China as well as planned dealer stock reductions in the quarter.

“We also continue to be impacted negatively by uncertainty over diesels in Europe along with Brexit and additional diesel taxes in UK.

“Given these issues, we will remain focused on driving growth and simultaneously reducing costs and boosting operational efficiency and capability, taking the necessary steps to shape our future.”

Speth said he expects JLR sales and financial results to improve over the remainder of the financial year, driven by continued ramp-up of new models, most recently the electric Jaguar I-Pace, and with the new lower duties effective in China.