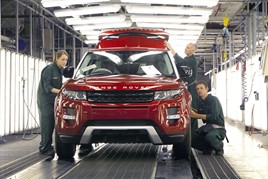 Jaguar Land Rover has joined other manufacturers in warning the Government that a Brexit deal without frictionless trade will threaten future investment in the UK.

JLR is the latest company to make it clear that without more details how Brexit will work, it has to put investment decisions on hold or start planning for the worst case scenario.

JLR has joined Nissan, BMW, Unipart and Airbus with making public calls about the lack of clarity and direction over the Government’s plans ahead of leaving the European Union next year.

"As a result, we would have to drastically adjust our spending profile. We have spent around £50bn in the UK in the past five years - with plans for a further £80bn more in the next five.

"This would be in jeopardy should we be faced with the wrong outcome."

He told the FT JLR would be forced out of the UK if the right deal isn’t made. He said this option was hypothetical at this point and “it’s an option I hope we never have to go for”.

BMW has already said it needs a decision on what the situation will be at borders in the UK before September or it will have to start building contingency plans which will push up the price of cars, restrict its supply chain and as a result put pressure on the competitiveness of its UK production operations.

Honda has also said increased admin at UK borders is likely to add £2.1m in paper work and IT systems.

The calls from manufacturers follow on from the SMMT’s International Automotive Summit 2018 in London on June 26, where it revealed manufacturers halved investment in new models and factory improvements in the first six months of 2018.

SMMT chief executive Mike Hawes said: "There is growing frustration in global boardrooms at the slow pace of negotiations."