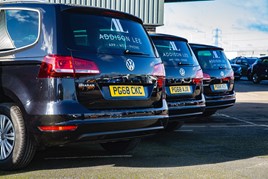 Jaguar Land Rover (JLR) may be planning to buy taxi firm Addison Lee in a potential £300m deal, according to reports.

The Coventry-based car maker has been named as one of the prospective purchasers of the taxi operation as it looks to further its involvement in personal mobility solutions, according to a report in the Sunday Telegraph.

Falling diesel sales and a decline in the Chinese market has left JLR in a challenging position.

In February, it posted its biggest quarterly loss of £3.4bn and announced it would shed about 4,500 jobs.

The acquisition of Addison Lee would enable JLR to position itself for a possible future of shared ownership and driverless cars.

Addison Lee is involved in a number of project that aim to develop autonomous vehicles and ride-sharing services.

Last year it joined forces with autonomous driving tech company Oxbotica with a view to put fully autonomous vehicles on the road in London by 2021.

The ambitious co-operation project between Addison Lee and Oxbotica will see the former’s fleet of around 4,800 vehicles in the capital gradually transitioning to feature more autonomous vehicle (AV) technology.

JLR and Addison Lee have been working together since last year on the ServCity project, which aims to develop a fleet of six autonomous Land Rover models to provide a premium mobility service.