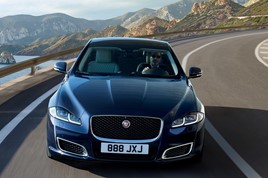 A new electric variant of the next generation Jaguar XJ luxury saloon will be the first of a range of electric vehicles built by Jaguar Land Rover at its Castle Bromwich plant.

The British manufacturer has announced its commitment to making its next generation of zero emission cars in the UK.

Its chief executive, Ralph Speth, said the future of mobility is electric and JLR is a visionary British company.

“We are co-locating our electric vehicle manufacture, electronic drive units and battery assembly to create a powerhouse of electrification in the Midlands,” Speth added.

Today’s announcement, which safeguards several thousand jobs in the UK, is the next stage in execution of Jaguar Land Rover’s electrification strategy.

In January the company confirmed plans to bring battery and electric drive unit assembly to the Midlands with investment in new and existing facilities.

A new battery assembly centre at Hams Hall, operational in 2020, will be the most innovative and technologically advanced in the UK with an installed capacity of 150,000 units, said JLR.

JLR said the extensive transformation of Castle Bromwich to become the UK’s first premium electrified vehicle plant will be the most significant in the plant’s history.

The expansion of Jaguar Land Rover’s electrified vehicle line up will give customers a greater choice of vehicles to suit their lifestyles, said JLR, however increased consumer take-up remains a challenge and the new technology must be affordable.

“To realise this, however, we need the right conditions to encourage more manufacturers to invest, innovate and sell competitively, including massive infrastructure investment and long-term support and incentives for consumers.”

He said securing significant giga-scale battery production in the UK will be essential to future-proof this sector.