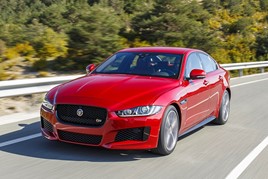 Jaguar Land Rover is recalling 44,000 vehicles for repairs after The Vehicle Certification Agency discovered evidence that excessive CO2 emissions may be produced by 10 of its models.

The affected JLR models, all fitted with the brand’s two-litre Ingenium turbodiesel and turbocharged petrol engines, “may emit excessive levels of CO2 and may not conform with the certified condition”, according to the European commission’s rapid alert system.

The manufacturer has informed the Driver and Vehicle Standards Agency, which handles recalls, of the findings and dealership workshops will now be called upon to carry out free repairs on the models.

A spokesman told The Guardian newspaper that the repairs could include software updates as well as physical alterations, with some Range Rover Evoque models requiring the fitment of new tyres.

JLR’s recall will affect versions of the Land Rover Discovery, Discovery Sport, Range Rover Sport, Velar and Evoque made between 2016 and 2019.

The recall is the latest blow for JLR, which has been forced into job cuts at its UK manufacturing facilities amid uncertainty caused by ongoing Brexit negotiations, a downturn in demand for diesel vehicles and a decline in sales in China.

Management, marketing and administrative roles are expected to be the main target of JLR’s jobs cuts, which will attempt to deliver £2.5bn of cost-cutting measures.

The FT reported that Ford’s job losses will come as it bids to cut $14bn globally.

In October last year, N Chandrasekaran, chairman of JLR's parent company Tata Motors, announced a turnaround programme at JLR "to drive £2.5bn of profit, cost, and cash flow improvements over the next 18 months".

He said: "In JLR, market conditions, particularly in China, have deteriorated further. To weather this volatile external scenario, we have launched a comprehensive turnaround plan to significantly improve our free cash flows and profitability."

Sales of cars in China dropped by 6%, to 22.7 million, during 2018, according to the China Passenger Car Association (CPCA) in the market’s first decline for two decades.

The decline is part of a picture which led to JLR’s recent posting of a £354m half-year loss.

JLR currently employs 40,000 people in the UK, mostly in the West Midlands.