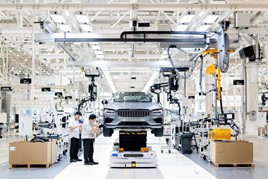 The first Polestar assembly plant has opened in China, getting production under way of the launch model, Polestar 1.

The factory at Chengdu will build cars for global export markets as well as China's own new car market.

It says the first customer deliveries of the Tesla-rivalling Polestar 1, a four-seater coupe with 600bhp, will begin before the end of 2019.

Only 1,500 will be sold globally, but the Polestar 2 - a more practical performance crossover - will be made in higher volumes. AM recent reported how UK consumers got their first view of the Polestar 2.

Earlier this year it opened a R&D centre in the UK, at Coventry.

Thomas Ingenlath, chief executive of Polestar, said: “We promised we would have our first production facility built in 2019, we promised cars would be delivered to customers this year, and we promised we would do things differently – once again we are delivering on our promises. This is a hugely proud moment for the whole team at Polestar.”

The Polestar Production Centre aims to be one of the most environmentally responsible car factories in China. In keeping with these ambitions, the facility was conceived with the goal of achieving Gold status in the globally-recognised LEED ratings (Leadership in Energy and Environmental Design).