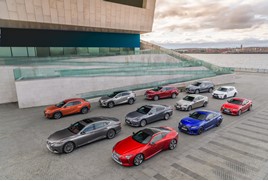 Lexus has been named the most reliable car maker in the newly published Which? car reliability survey.

Toyota took second place in the study, which detailed the ownership experiences of more than 47,000 UK motorists, and was named the most reliable mainstream brand.

Lexus secured its leading status with a fault-free report for the CT 200h hatchback and a near-perfect performance from the NX mid-size SUV.

The results covered vehicles from new to three years old and three to eight years old.

The report from Which? stated: “Got the money for a Lexus? Do it. You might just forget what a mechanic’s waiting room looks like.”

Which? highlighted the durability and mechanical simplicity of the Lexus hybrid system in making its cars more resilient to faults.

Ewan Shepherd, director of Lexus in the UK said: “The results of the thorough research carried out by Which? are a further validation of the lasting quality and craftmanship engineered into every Lexus model. Making cars that people can rely on, year after year, is fundamental to our business and goes hand-in-hand with our commitment to always providing the highest standards of customer service.”

Mark Roden, Toyota (GB) operations director, added: “The people who own and drive our cars are the best judges of quality and it’s fantastic that, through the Which? survey, they have given such a positive verdict.

“Toyota is long-established as the global pioneer of hybrid electric technology and we continue to improve its performance – most recently taking efficiency to new heights in the system developed for the all-new Yaris. True to our commitment to building ever-better cars, we aim to deliver even better quality and reliability in the future.”

Toyota, meanwhile, has been recognised as the highest-ranking automotive brand by the institute of Customer service and held the top spot in the NFDA’s EV dealer attitude survey.

AM Poll
Which aspect of your business will require most focus in 2021?
Vote
View all
1175