Hyundai makes Brexit price promise on all orders placed before 2021 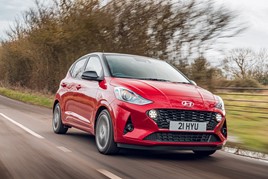 Hyundai has become the latest manufacturer to reveal vehicle pricing plans ahead of a potential ‘no deal’ Brexit.

The carmaker has committed to protecting its vehicle prices on all orders taken ahead of on the transition period ending on December 31.

The price protection promise applies to both retail and fleet customers, as well as Hyundai Affinity buyers, and is valid on existing model year vehicles.

Motability vehicles will see price protection on advance payments for applications made in 2020, with the cars to be delivered in 2021, it said. Demonstrator vehicles are excluded.

“Our retailers have been enormously innovative and resilient during 2020, and we are doing what we can to support them,” said Ashley Andrew, managing director of Hyundai Motor UK.

“Having successfully navigated two national lockdown periods, the remainder of 2020 is a fruitful opportunity for our retailers and we don’t want the uncertainty of a no-deal Brexit to stand in the way of sales.

“This price protection promise will support our dealers this month while also reassuring our customers.”

The Society of Motor Manufacturers and Traders (SMMT) teamed-up with automotive industry bodies from across Europe in a plea to avert what they have referred to as a “€110bn no deal Brexit disaster”.

A total of 23 industry bodies came together calling for an urgent free trade deal before the end of the transition period  after calculating that a 'no deal' and the implementation of WTO tariffs could jeopardise the production of around three million EU and UK built vehicles over next five years.

If no deal is reached and ratified before December 31, World Trade Organisation (WTO) non-preferential rules, including a 10% tariff on cars and up to 22% on vans and trucks would apply.

It adds that additional customs duties, costs and complexity would significantly disrupt sourcing of parts and components from the EU.