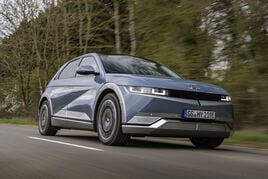 Hyundai has invested in a new marketing campaign ahead of the arrival of its new Ioniq 5 electric car in UK dealerships later this year.

It is embarking on its largest ever TV sponsorship deal, beginning today (July 1). The 12-month campaign with Network Film on 4 is understood to represent the UK’s largest TV film sponsorship opportunity.

The campaign will offer year-round coverage of the new Ioniq 5, with peak presence across Channel 4’s portfolio; including Channel 4, E4, More4, Film4 (pre 9pm) and All 4.

Ashley Andrew, Hyundai Motor UK MD, said: “With its cutting-edge technology, built around a new dedicated electric vehicle platform, the Ioniq 5 will cement Hyundai as pioneers in the electrified mobility space. Channel 4’s commitment to demonstrating innovation and creativity makes it the perfect partner to support the launch with mass awareness of the no-compromise approach we’re taking with our new EV-exclusive Ioniq brand.”

The Ioniq 5 will also make its dynamic show debut at the Goodwood Festival of Speed July 8-11, appearing on the famous hillclimb.

For those hoping to get a little closer, the Ioniq 5 will also be appearing in Goodwood Festival of Speed’s Electric Avenue display.

Andrew added: “Goodwood Festival of Speed will be one of the first opportunities that the UK public will have had to see Ioniq 5 on the move and up close, so we’re thrilled to be able to share this landmark in our history with the many enthusiasts expected at the Festival.”

The Ioniq 5 is the first model in Hyundai's EV-exclusive Ioniq sub-brand, and the first Hyundai built on a new dedicated E-GMP battery electric vehicle platform. It will be priced from £36,995 when it arrives in showrooms later this year.