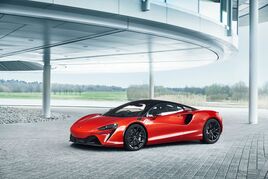 McLaren Automotive will open its 100th dealership this year, a decade after opening its first retail site in London.

The newest addition to McLaren’s global retail network will be in China.

Its soon to be 100 strong retailer network now operates in 40 markets, with vision to expand organically as part of the brand’s Horizon2030 business plan.

Mike Flewitt, McLaren Automotive CEO, said: “In just 10 short years we, together with our dedicated retailer network, have grown from our first retailer in London to opening our 100th retailer which will be in China later this year, a market which has been growing very strongly and winning many fans.

“It is also fitting given the very global nature of our company and ambitions and our second decade is an intensely exciting and innovative one not only for McLaren but also for the wider automotive world. As we embrace a future of electrification with the all-new and lightweight McLaren Artura, we’ll continue to push the boundaries in the pursuit of creating the world’s finest drivers’ cars.”

McLaren opened its first dealership, in partnership with Jardine, at One Hyde Park, London, in June 2011 and had about 30 retailers on board by the end of that year. That number remained stable until 2014/15 when the network expanded by about 40% globally.

In the decade since it first site opened, McLaren has grown its retail presence in more than 40 territories worldwide showcaseing supercars such as the benchmark-setting 720S and the seminal 675LT – the first of the modern-day McLaren Longtails – the McLaren P1TM which was the world’s first hybrid hypercar - as well as the GT and ultra-exclusive Ultimate models, the McLaren Senna, Speedtail and, more recently, the Elva roadster.

He assumes responsibility for global sales and operations as well as overseeing the company’s bespoke division, McLaren Special Operations (MSO) and the McLaren aftersales business.