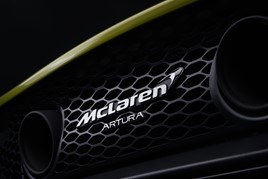 McLaren has announced its new series-production supercar will be named Artura and powered by a V6 hybrid powertrain.

Replacing the existing 570S, the newcomer will likely go head-to-head with the Porsche 911 and Audi R8.

Its new name marks a departure from the British brand’s usual numerical naming structure for all but its limited-run specials.

It’s the first car to be built on an all-new, platform architecture optimised for electrification and designed and manufactured in the UK at the McLaren Composites Technology Centre.

The Artura furthers McLaren’s commitment to super-lightweight engineering principles, with the additional mass of its hybrid system largely offset by the application of weight-saving technologies throughout the chassis, body and powertrain.

McLaren says the Carbon Lightweight Architecture at the heart of the Artura provides a “class-leading weight advantage” and forms the base for “dynamic excellence”.

Mike Flewitt, CEO of McLaren Automotive, said: “Every element of the Artura is all-new – from the platform architecture and every part of the High-Performance Hybrid powertrain, to the exterior body, interior and cutting-edge driver interface – but it draws on decades of McLaren experience in pioneering super-lightweight race and road car technologies to bring all of our expertise in electrification to the supercar class.”

Further details about the Artura will be revealed in the coming months, with its official unveil planned for the first half of 2021.