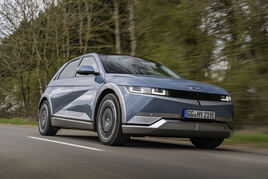 Hyundai is expected to have the largest range of electric vehicle (EVs) by 2025 compared with any other car manufacturer, according to analysis by Peter Vardy.

The dealer group has looked at reports submitted by 37 manufacturers to identify to which extent vehicle manufacturers are increasing EV models and investment.

The research highlights how more traditional manufacturers with established dealer networks are looking to battle new brands like Tesla that have been dominating the EV market so far, even without a traditional franchised dealer network to facilitate sales.

The analysis highlights Vauxhall and Volkswagen in particular as currently the most eager for dominance in the EV market in the short term.

Hyundai plans to take the lead when it comes to creating a full range of cars fit for the EV transition.

The Korean automaker will add 20 models to its range, totalling to an offering of 23 all-electric cars to customers by 2025.

Citroen will also be making a considerable jump in their EV offering, with one EV release in 2022, followed by 16 more before the end of 2025.

Despite Vauxhall taking the lead in their EV offering in 2021, they lag behind as the UK approaches the 2030 deadline for the ban on new petrol and diesel cars.

Other manufacturers that are predicted to make the biggest strides in the EV market are Kia and Toyota.

Kia will produce 11 fully electric models by 2025, promising to hit a company target of one million eco-friendly sales by 2026.

Toyota, on the other hand, are set to go one step further and release 15 brand-new electric vehicles by 2025 as part of 70 new eco-friendly models by 2025. 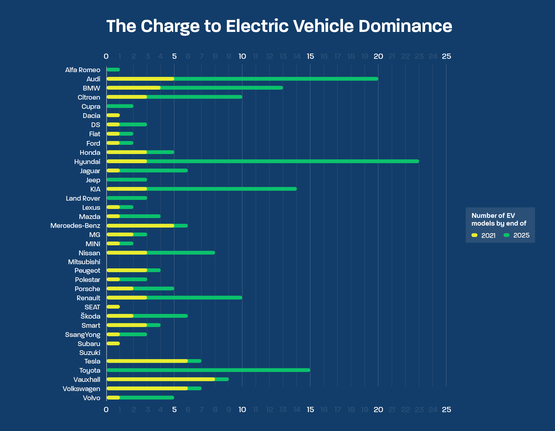