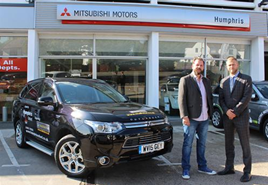 Humphris Mitsubishi has joined forces with an Oxford production company in a move that will see staff at the dealership in Oxford become stars of their own films.

The partnership with ChalkStar Films will see the company get the long-term loan of a Mitsubishi Outlander plug-in hybrid electric vehicle (PHEV), which will be used to chauffeur celebrities and transport the film crew.

In return, ChalkStar will produce a series of videos for the dealership using a mix of professional presenters and staff, highlighting the latest models, technological advances and offers, which will be used on social media.

Adam Ingles, general manager at Humphris Mitsubishi, said: ‘We were looking for a more creative way to promote Humphris both in Oxford and on the web.

“Video is a great way not only to promote the brands that we sell but to promote Humphris too.

“It makes a lot of sense to work with a local company, and as ChalkStar do a lot of work throughout Oxford it will be great to see our name around the city. We are delighted with this new partnership and we’re confident it will be a success.’

Martyn Chalk, company director of ChalkStar Films, said: ‘We have been looking for a car that was spacious, efficient and environmentally friendly whilst providing luxury when we transport celebrities.

“The Mitsubishi Outlander PHEV gives us all of that and more, without compromising.

“There is also the added bonus of being congestion charge-free when we are working in London. Forging a strategic partnership with one of Oxford’s oldest and most-loved dealerships is extremely important as we take our brand forward.’