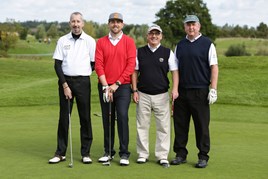 A team from dealer group CCR Mitsubishi joined a host of sporting celebrities in a fundraising golf tournament and raised £23,000 for the company’s chosen charity, WellChild.

The group had vehicles from the Mitsubishi range, including the new L200 Series 5, positioned around the course and there was a chance to win an Outlander PHEV for anyone who got a hole in one. The was also a competition to guess how many balls were in the back of one of the new L200s.

CCR Mitsubishi, which has nine dealerships across the south, has supplied WellChild with vehicles for free since January 2014.

WellChild practical and emotional support for seriously ill children, young people and those who care for them to ensure they receive the best possible quality of care.