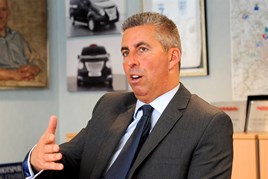 Essex-based car dealer Glyn Hopkin is poised for another record year in 2016, the AM100 group says.

The business achieved more than 10,700 new car registrations from January to the end of November, up 15% on the volume achieved over the same period last year. This is equivalent to an average of 32 cars sold per day across Glyn Hopkin’s 13 dealerships, and will help the company break its target annual turnover of £400 million.

Nissan’s flagship SUV crossover, the Qashqai, maintains its place as the Japanese brand’s best-seller across Glyn Hopkin’s 13 Nissan sites, representing more than a third of all sales this year.

With more than 4,000 units sold in 2015, Glyn Hopkin Nissan has achieved more than 10 Qashqai sales every day.

The Japanese carmaker now boasts a market share of more than 6% and is the fourth largest car manufacturer in the UK (year-to-date 2015).

“We’ve been astounded by our Nissan dealers’ record sales this year and our progress is testament to the efforts of our capable and committed team.”

“Seeing the strong demand for Qashqai and Juke in particular we thought we might be in for another successful year, but by October we had already smashed the figures for the whole of 2014 put together.”

Glyn Hopkin Nissan has experienced considerable interest in electric vehicles this year, with the Leaf and e-NV200 now accounting for one out of every 20 vehicles sold across the group.

The Nissan Juke has accounted for more than a quarter of the group’s Nissan sales in 2015.

Glyn Hopkin opened its first Nissan showroom in London Road, Romford, Essex in January 1993, going on to expand with a further 12 Nissan dealerships across London and the South-East.

The newest additions were opened earlier this year, in East London and Cambridge.